My boyfriend came to visit me last month and we decided to do a little Irish staycation. Galway is somewhere everyone always talks about but I’ve only every visited for a few hours on the way to another destination. So we decided to spend a couple of nights at the Galmont Hotel in Galway and see what all the fuss is about. We both love a spa so the Galmont was the obvious choice for us. Here’s what we thought of the hotel and what we got up to in Galway.

A Getaway at the Galmont Hotel in Galway 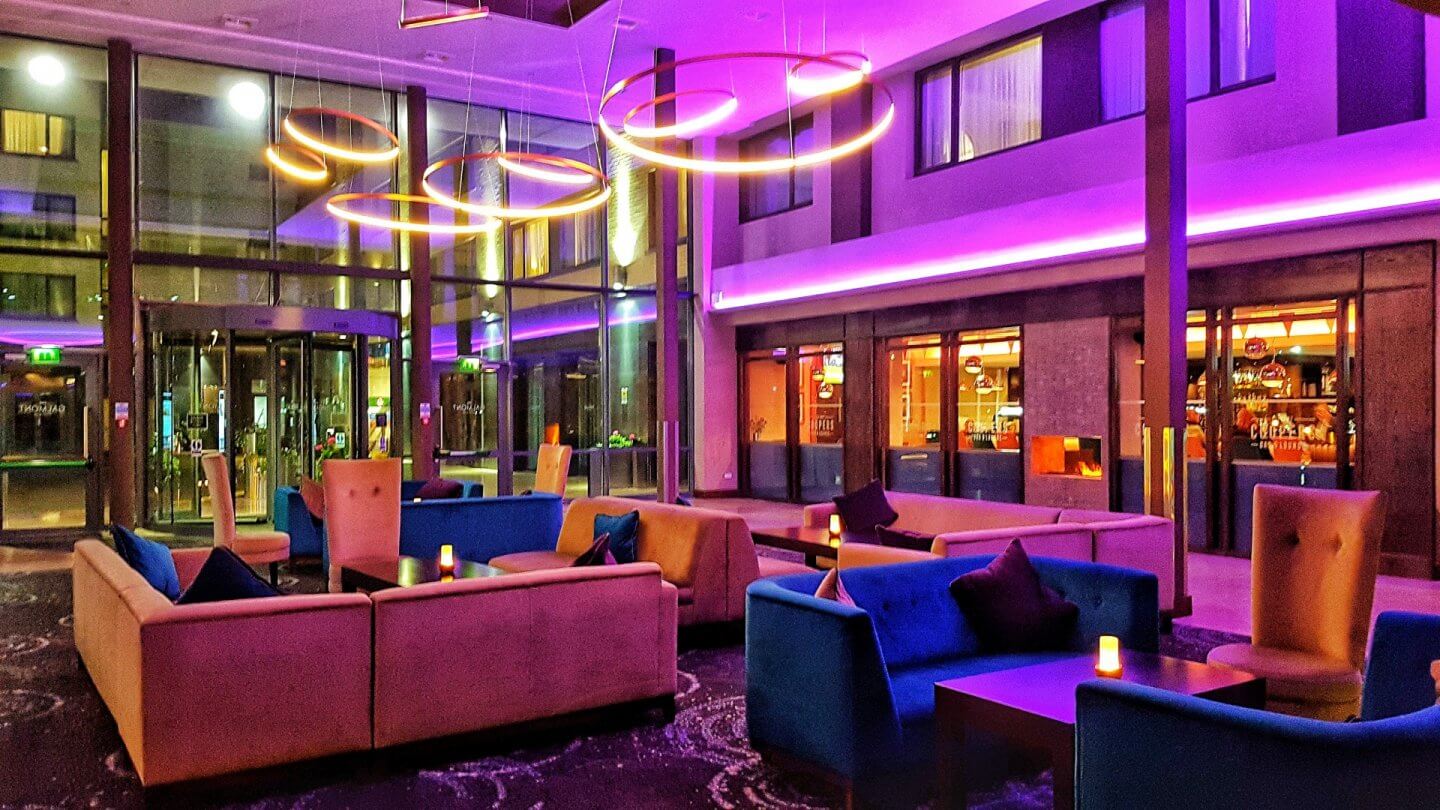 The lobby of the Galmont.

The four star Galmont Hotel was previously the Radisson Blu Hotel and Spa in Galway. It is very centrally located, overlooking Galway Bay and within minutes walk from the city centre. It is home to the Spirit One spa and fitness centre. There is a restuarant and bar on site as well as room service. The Galmont has onsite parking for guests at a rate of €8 per day and the bus and train stations are minutes away. Driving from Dublin to the Galmont takes about three hours.

The Rooms at the Galmont

The view from our room.

The toiletries in the bathroom were “Thisworks”. The bathroom was modern and the water pressure was good. The wifi was good and strong, perfect if you’re on a business trip. Robes and slippers were provided as well as an iron and hairdryer. The bed was the kind of bed you struggle to get out of because it’s so comfortable. The lounge chair by the window was my favourite spot in the room.

The Food at the Galmont Hotel

The artichoke soup in Coopers.

The Galmont has two places to dine. The first is Coopers Bar and Lounge and the second is Marina’s Restaurant. On our first day in the hotel we arrived too early for check in so we decided to have a bite to eat in Coopers. I had the artichoke soup with chips and Alastair had the classic toastie. We were both very happy with our choices and the service.

On our first night we had dinner in Marina’s Restaurant with a view over the bay. I was delighted with the vegetarian offerings on the menu. Myself and Alastair split the crusty bread for two which was more than enough for us. For mains I had the pappardelle pasta full of asparagus, peas and parmesan. Ali had the steak. Neither of us managed to finish, the portions were incredibly generous. Despite being completely stuffed we had cheesecake and molten chocolate cake for dessert. Everything tasted spectacular. I’d highly recommend eating there if you’re staying in the Galmont.

My vegetarian main in Marina’s.

Afternoon tea at the Galmont is something not to be missed. It is served in Coopers Lounge. We tried it on our second day in Galway. They were able to cater to my vegetarianism serving me veggie sandwiches along with a selection of cakes. I never cease to be amazed by how enormous afternoon tea is. Make sure you’ve starved yourself suitably before hand. We both chose the chia and orange tea, but it was VERY strong when served. I’d stick to something safe like peppermint if I was choosing again.

Of all the sandwiches in my afternoon tea my favourite was the Galway goats cheese, yellow pepper and hazelnut. Of the desserts I preferred the strawberry and champagne jelly which was so light and refreshing. The macaroons were delicious too, but macaroons always are. It was nice that the scones were miniature too instead of the usual giants. That way they left more room for all the other desserts.

Our afternoon tea in Coopers Lounge.

On our second night in the hotel we decided to give room service a try. I ordered the pizza, which was incredibly good as far as room service pizza goes. I was impressed. Ali had the curry which he said was decent. The food arrived very quickly. If you want a lazy night in it’s worth doing.

Spirit One Spa at the Galmont

The lava shell used in the massage!

We were lucky enough to try a treatment at the Spirit One Spa in the Galmont. We booked the lava shell full body massage which lasts for one hour and twenty minutes and costs €95. I’ve tried quite a few spa treatments in my time but I’d never heard of a lava shell massage before. It was absolutely divine. After the massage, during which I definitely nodded off a few times, we headed to the thermal suite.

Chilling in the thermal suite, about to lounge on the heated beds.

The thermal suite is often my favourite part of a spa experience. I love the variety. In the Spirit One thermal suite there was a beach room containing artificial sand which didn’t stick to you, oceans sounds and UV lights to give you that dose of sunshine that we often miss out on in this country. The experience showers were my favourite. These varied in temperature and pressure and were infused with essential oils. There is also a sauna, hammam and heated loungers.

Despite being in Galway for two nights we still managed to only see a tiny portion of it. One morning we grabbed brunch in Esquires Coffee on Eyre Square. Their iced coffee was delicious. It was packed with locals and tourists alike. Next door is a wings mural, which always makes for a great photo.

We strolled down Shop Street, watching buskers, until we reached the Spanish Arch. Then we decided to keeping walking until we got to Salthill. In Salthill we stopped for coffee at Ground & Co. They were definitely closing up but they kindly served us some takeaway coffee. We had planned on eating in town after our walk back towards the hotel but we were still full from our afternoon tea. That’s how we ended up deciding on room service later in the evening.

I made my boyfriend take a photo for me haha.

There’s obviously a lot more to see of Galway but we weren’t there to do touristy things, we were more interested in having a relaxing spa break since we don’t get to see each other very often. The Galmont was the perfect place for us to escape to for a couple of nights.

Have you been to the Galmont?
Where’s your favourite spa hotel in Ireland?