The Wicklow Mountains National Park is one of my favourite places in Ireland and I don’t know why it has taken me this long to write about it. I took a trip up there very early one weekend to test out the new Samsung S9 Plus as part of a collaboration with Three UK and Samsung. I had never driven up there that early and it was incredible. There were no bus loads of tourists and there was an atmospheric mist hanging around making everything look simultaneously eerie and beautiful. Here’s some of my favourite spots, facts and photos from the national park.

The Wicklow Mountains National Park is somewhere most Irish people take for granted. We all love a little Sunday trip to Glendalough, especially if someone is over visiting. However, there’s a lot more to the national park than Glendalough. The park sprawls across more than 54,000 acres, making it the largest National Park in Ireland. The terrain varies from blanket bogland to woodlands, grassland, rocky mountains and more.

Like I said, most people just visit Glendalough to take in the views of the valley and explore the ancient monastic settlement, and maybe grab dinner. This is really the only part of Wicklow Mountains National Park where you’ll find major facilities, shops and restaurants. This means it’s pretty easy to escape the tourists if you have a car, and maybe some decent hiking boots. If you have a car, driving through the National Park is an absolute pleasure. Stop at your leisure and you’ll never know what you’ll find.

Herds of wild deer roam the area. I usually spot them around the Sally Gap drive. I’ve also spotted otters and peregrine falcons in the park. If you do drive the Sally Gap road you’ll also be treated to views of Kippure Mountain, Glencree valley, Lough Tay (Guinness Lake) and Glenmacnass Waterfall.

For me, one of the most stunning things about the park is the variety of colour to be seen. Depending on the season and/or location you could be met with a sea of purple heather, a blanket of yellow gorse, brown bogland, countless shades of green from ferns to conifers, orange lichen and more. The flora of the Wicklow Mountains National Park is incredibly important and diverse. It is even home to several rare and threatened orchids.

There are plenty of hiking trails within the park and rock walls perfect for climbing. These off-road locations often reward you with the best views. Another one of my favourite spots, just within the borders of the National Park, is the Powerscourt waterfall. I bring everyone here whenever they come to visit. It’s privately owned and you have to pay in to see it, but it’s so pretty and the surrounding woods are great for a stroll. They also have a lovely little coffee kiosk and there’s plenty of parking. Go early to avoid crowds (it never really gets THAT crowded though).

If you’re a cinema fan you’ll recognise parts of the Wicklow Mountains National Park from films such as Braveheart, P.S. I Love You, Reign of Fire and Michael Collins as well as TV shows such as Vikings and The Tudors.

You can read more about the National Park here.

Seeing a deer in the early morning mist.

We stopped by the side of the road to take a few photos. At first I didn’t see the deer, then I heard the movement. It moved so fast that I thought it was a fox, but then I saw the spots and the long legs. It turned to look back at me and I managed to snap this photo using the Live Focus mode. Considering I was quite far away and was using a phone, I’m pretty impressed with this photo.

Places like this are just by the side of the road.

This old grown over bridge was just by the side of the road as we drove and was where I saw the deer. I love how misty it was that morning. I think it made the National Park look so much more mythical.

Brackish water and lichen is the way to a girl’s heart.

I 100% sat in a puddle while trying to get this photo #Glamlife .

Up at the mines there are some spectacular views.

Glendasan Valley Lead Mines is a great viewpoint down the river and out over the valley. There are also historical ruins from the mine, if you’re into that. I managed to catch a bee in flight when taking this, which was entirely by accident.

We’re in the country now.

In the carpark of Glendasan I found this trailer full of beautiful sheep. A very Irish scene indeed! I love the detail you can see in the wool coats of the sheep. 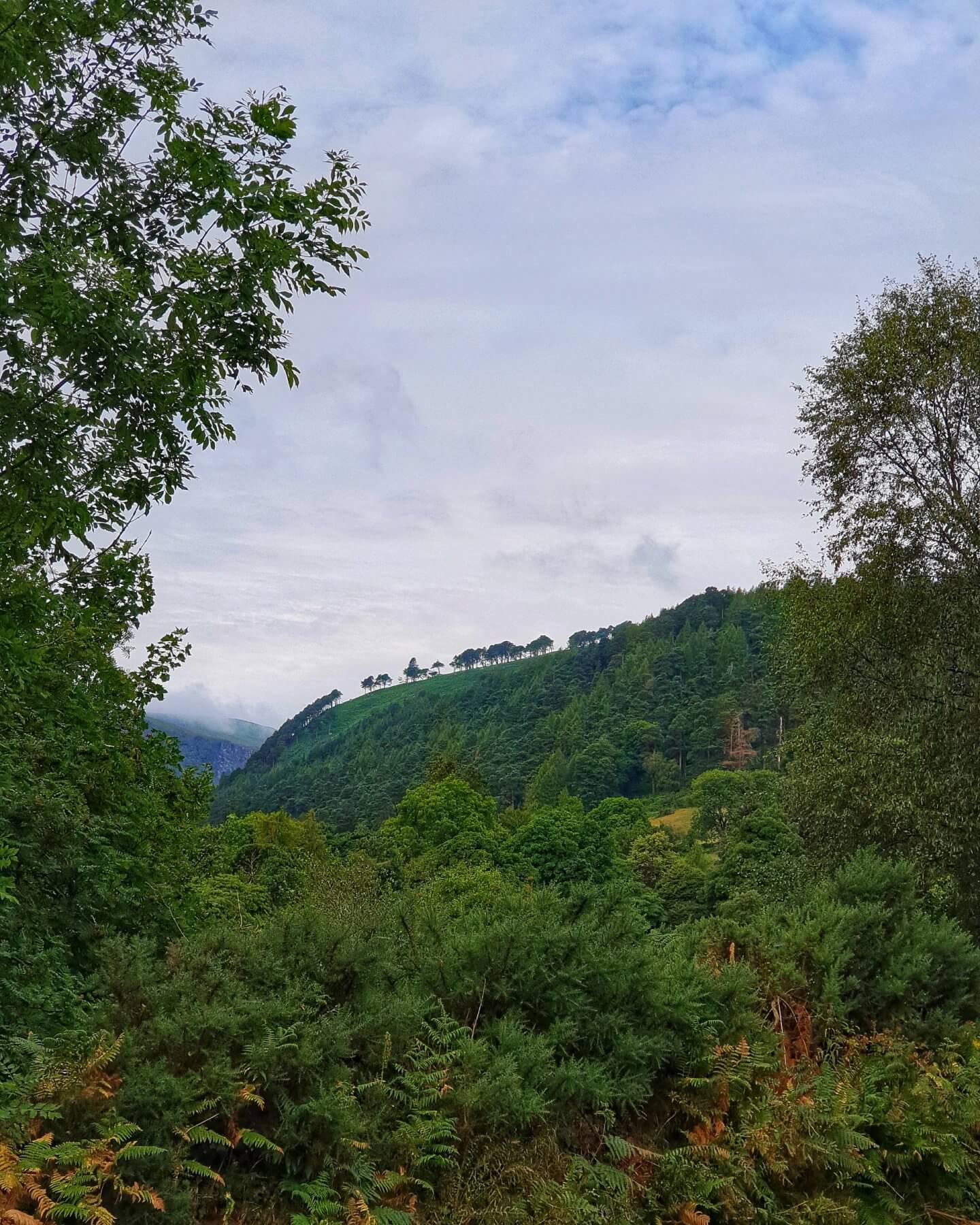 And the trees lined up to jump off the mountain.

If you go down to the woods today!

When the landscape is so patriotic that it sprouts plants in orange and green.

It’s coming into the time of year where the landscape starts to change colour, my favourite time of year! And what better colours for Ireland than orange and green?! There are scenes like this all along the roads throughout the Wicklow Mountains National Park.

This is the photo I had displayed in the Herrick Gallery, London. It’s the Glendalough Tower through roadside ferns.

To give you a bit more info on the collaboration with Samsung and Three, I was invited by Traverse Events to participate. I was one of many wonderful travel bloggers selected. What we all had in common was a love of taking photos. Three UK then sent us all out either a Samsung S9+ or S9. I was given the Samsung S9+ . We had a couple of weeks to experiment with the phone and see what it was capable of.

I’m always impressed with Samsung mobile cameras, so I knew this time would be no different. The dual camera was fantastic. I loved that when I used the “Live Focus” (basically portrait mode) it took two photos and gave you the option to use the wide angle or close up shot. I didn’t love that the charging port had changed shape on the S9 plus, BUT Samsung are thoughtful and provided an adapter so that any old charging cables could still be used.

Traverse also held workshops in London to help us get the most out of our mobile photography. We then had to select our best photo and submit it to Traverse. All of these photos were then printed and hung in the Herrick Gallery in Mayfair in London. The “Three Gallery” display was open to the pubic for a couple of days, ultimately finishing with a reception for everyone involved and a prize-giving. Sadly, I didn’t win, but I didn’t envy the judges. There were so many fantastic photos in the gallery that I wouldn’t have liked to have to choose! I didn’t mind anyway, I was delighted to take part in a campaign with such fantastic brands and to spend the night celebrating with peers.

I’ve been using Samsung and Three for YEARS myself, even before I started blogging, so for me it was just so nice to be involved with them on a more professional level. Plus this whole project pushed me to up my mobile photography game and to explore my surroundings a bit more, which is the most important thing.

Have you been to the Wicklow Mountains?
What’s your favourite spot?

Other Great Posts About Ireland

Other Posts About Tech