The Amazon, no, not the website that pretty much sells everything! I’m talking about the actual RAINFOREST and/or RIVER. You know, the 2nd longest river in the world! That rainforest where the parrots in the movie “Rio”, came from?! The Amazon is kind of a big deal.

In November 2011 I spent 2 months in South America. During that time I spent a few days in The Amazon Rainforest and it was one of the most overwhelming and incredible things I’ve ever done. We cruised down the river, and when I say cruise…. it was a small river boat…..not an actual cruise ship, we went on treks through the jungle, and drank cocktails in the dark with only our torches for light. What I saw in the Amazon was like nothing I’d ever seen before.

Here are some of my favourite moments in the Amazon.

The time I saw Capybaras swimming across the Amazon River. Before that moment I had only ever seen these animals in nature documentaries or in captivity. Capybaras are the largest of the rodent species, and, given that I had pet rats I always thought they were adorable. We were lucky to spot them as we cruised down the river. They kind of look like giant guinea pigs with longer legs and short brown fur.

When our guide informed us that we could eat the ants on a tree we passed I had to try it! I was terrified at first, but once I saw a few others in my group try it I decided to man up and go for it. They were leaf cutter ants and numbed the mouth a bit, which was just fine as I actually had a bit of a tooth ache at the time!

On the way to meet our river boat and guide we drove down a dirt-road. Well, in fairness, most of the roads were dirt roads. However, on this occasion a tree had fallen across the road due to bad weather. There was only one car in front of us. We watched as two young school girls hopped out of the back of the car. One ran right to a house by the side of the road. The other started searching in the back of the car for something. After a moment she emerged victorious with a machete. Shortly after the other girl returned with a chainsaw. We watched in dismay as these two girls set to work hacking down the tree with the help of a couple of local men. 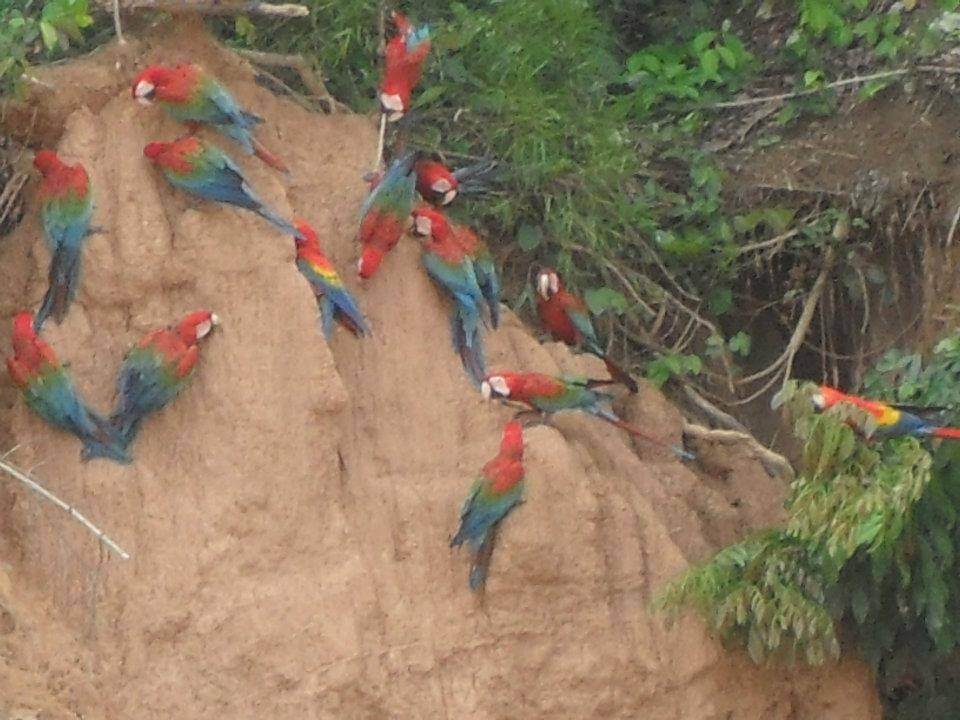 On our way back to the airport we were cruising down the Amazon River when we saw a large group of red macaw parrots on the river banks. Apparently the banks of the river turn into a sort of giant salt lick and all the parrots gather to get nutrients from the soil. It was probably one of the most colourful displays of nature I’ve seen on my travels.

If you’ve been reading my blog from the beginning then you’ll know ALL about that time I sat on a wasp in the Amazon. If you haven’t, then I suggest you click the link above and have a good laugh at my expense. In fairness, it was 100% my fault. The wasps were very friendly, just sitting on my arms enjoying the salty goodness that is my sweat. It was just bad timing that once such wasp happened to be sitting in my seat right when I sat down. In hindsight it was definitely one of the funniest things I’ve ever had happen on my travels.

I made friends with a butterfly, right around the same time I sat on the wasp. Perhaps the butterfly was thankful for the death of a wasp, or she felt sorry for me wincing at the pain radiating through my buttocks. Either way, she landed on my hand when we first got on the boat and stayed there for about an hour. Even when we got off the boat and went for a trek through the jungle, she was still chilling on my hand. Eventually she flew off. I was a little sad to see her go.

During a trek through the jungle, after I’d been stung on the ass, we were introduced to a tree called the “Dragon’s Blood” tree. This tree, when cut diagonally, releases sap that is BRIGHT RED and looks just like blood. It is used medicinally for many things in the Amazon, particularly bites, stings, cuts etc. According to my guide it contains antiseptic and anti-inflammatory properties. It would have been the perfect thing to put on my recently stung ass. HOWEVER, I was too embarrassed to tell anyone, so I stood there quietly, wincing in pain. Ha. I don’t recommend this method. Should you ever find yourself in a similar situation, tell your guide, just in case.

I’d never known about plantain until I visited the Amazon. Plantain is kind of a less sweet sort of banana. Plantain chips are literally the best thing ever, and I don’t even like bananas. On my trip to the Amazon, lunch always came wrapped in a plantain leaf and usually included plantain chips. Perfection!

When we got to a certain point on the river we had to get our passports stamped, which I found odd. However, when I saw the stamp I was delighted. There was an inky jaguar in the middle of my passport page and I could not have been happier.

Let’s Wrap it up!

So those are some of my favourite Amazon Rainforest moments, and I only spent a few days there! There’s so much more to see and hopefully, one day, I’ll get the chance to go back. Oh and did I mention I turned 23 in the Amazon Rainforest? Yep, that was pretty damn cool.

Here’s some useful links if you’re interested in The Amazon Rainforest.

If you want to learn about protecting the Amazon Rainforest;
http://www.worldwildlife.org/stories/protecting-the-amazon-for-life

If you fancy some reading about the Amazon River, this guy WALKED the length of the Amazon;
Walking the Amazon: 860 Days. The Impossible Task. The Incredible Journey