Now, I’m going to take you back with me to a balmy night in December 2011. I was in Rio, Brazil. “Why is this night significant?”,you ask. This night is significant because it is the night I undertook one of my most dangerous adventures. I hadn’t intended on it being such a night. However, it is often the unplanned nights that turn out most eventful. This night is the night that I ended up lost in the favelas.

Let’s Start From the Beginning 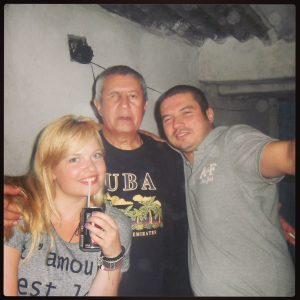 Me with my adopted Brazilian (God)father.

I was staying in a hostel run by a Brazilian/American family. Mellow Yellow hostel was it’s name. Definitely not the most modern, or cleanest of hostels, but it had it’s perks. When I first arrived the owner told me that I was to consider myself his daughter now and if I needed anything, or got in any trouble, to come straight to him and he would sort it out. He had a cataract in one eye and I got the distinct impression that he may, at one point in his life, have been involved in some activities on the wrong side of the law. He even taught me the rules of American football. A valuable skill. His son Tulio, beast of a man, was always on hand to get the party started. Then there was Leo, a massive Brazilian man that I like to think was also half teddy bear. I always felt safe when he was around. He taught me how to samba in the hostel bar. There were also three other regular members of staff, two English (Michael and Nash), and one Australian (Matty). All three spoke Portuguese and knew how to make a wicked Caipirinha. This is my favourite drink in the world. If you have never had a Caipirinha I command you to stop reading and google a recipe – it’s basically ice, lime, sugar and Cachaça or vodka if you have no Cachaça , though technically that would then be a caiprioska. Having made this drink, consume it and continue reading.

Anyway, one night we were sitting around in the bar wondering what to do. In fact, a local artist had asked to draw my portrait, so I was trying to sit still while everyone else drank. He was slightly creepy, not ideal. Suddenly, a favela party was suggested. I was dubious. I had seen pictures of huge warehouse-sized clubs and heard many stories of foreign travellers falling fowl of local pick-pockets, or worse. However, surrounded by my giant-sized troop of locals I felt that, maybe, it wouldn’t be too bad. I shoved all my valuables in my bra and hoped for the best.

Quick tip – Girls, keep EVERYTHING in your bra. When I went anywhere in Brazil I kept all my valuables in with my assets. At any given time I would have my passport, money, phone and camera all hidden away in my bra. I know some of you are wondering how I did it with my already sizeable breasts squeezed in there too, but trust me, it worked by some magic. My bra became somewhat of a Mary Poppins bag full of important items. I recommend getting the bras that have the little pockets in them for inserting extra padding. Simply take the padding out and put your money in. EASY. Sure, some stuff may get a little sweaty, but better sweaty than stolen!

Here I am staring through someone’s living room.

Back to the story! The crew split into two taxis. Luckily for me I was with Matt, Tulio and Richard. See, this was lucky because our two taxis ended up leaving us in separate favelas, at different parties. This was somewhat terrifying as we didn’t actually know where the others had ended up. When we arrived at our favela we hadn’t got a clue where to go. It was dark but we figured we needed to go up, so we started climbing the winding steps. Basically the place looked like a colourful building site. No doors, no windows, cement stairs. I saw a few rats, no big deal. The thing I couldn’t get over was that I was passing people’s front “doors”, minus the door. I could literally see into houses, right through the sparsely-furnished living room and out the other side. We tried to be as quiet as possible, just in case. I was still in the mindset that the favelas were some terrifying place full of criminals. I’m not gonna lie, I half expected Vin Diesel and his crew to pop out with a bunch of guns and fast cars roaring “THIS IS BRAZIL!!”. Unfortunately, that did not happen.

Eventually we had to stop and ask for directions. Richard and Matty did most of the talking. The extent of my Portugeuse is furão, which means ferret, not very useful in any situation. A kind man took us through his house and out the other side to some more steps which we  then started to climb. We then reached a family having a BBQ. They welcomed us and offered us some chicken. It was literally the best chicken I have ever had in my life. We stayed there for a while, welcomed as if we were part of the family. So far the favelas were not living up to their terrifying reputation. A member of the family then walked with us all the way up to the peak of the favela where we found our party. We said our thanks and headed inside. I was thankful to see two police men outside. How dodgy could it be if the police were basically bouncers?! However, on the flip side, how bad was it that they needed police there?!

Me and the policemen. I felt a little bit famous 😛

When I got inside I was surprised. It was basically a cement shed with a tiny bar which I didn’t entirely trust. I opted for coke from a can. Ladies, if you’re in a bar that you’re not 100% sure of, stick to soft drinks from a can. People often forget that the bar man is just as likely to spike your drink in some places as your fellow patrons are. Regardless, the atmosphere was amazing. It was more like a family gathering than a rave. We were the only tourists there with about 20 locals. It was here I met the man I affectionately call my Brazilian boyfriend, Daniel. We all danced samba and drank. Upon leaving the police asked to have their photo taken with me. Needless to say I was flattered and promptly obliged. Daniel then helped me find my way back down the steps and out of the favela where I was met with the remainder of my group. They were so drunk that they had sat down on the curb and were refusing to move until they got more alcohol.

At this point I decided I needed to go home. I didn’t want to trust Daniel, a man I had just met in the favelas, but after much reassurance and not really having any other choice I agreed to get the bus with him. Surprisingly he was a complete gentleman. He walked me all the way back to my hostel where we said goodnight. In the long run it worked out perfectly that Daniel had walked me back to the hostel because when we arrived at the front door the creepy artist from the start of this story was lurking around outside. He seemed to be insisting that I let him in so that he could come to my room. Obviously I was horrifed and a little bit scared, upon seeing this Daniel said some menacing words in Portuguese to the creepy artist which made him depart with great speed. The Brazilian boyfriend then made sure that I was safely inside before he left.

In the morning I learnt that my friends in the second taxi had also had a similarly wonderful evening spent at a family party. Perhaps the favelas aren’t as bad as tourists are led to believe?

Now, I know what you’re all thinking……. that was insanely dangerous and could have gone terribly wrong. You are completely right. However, it didn’t, and it was one of the best nights I have ever had. Of course, at any point I could have been robbed, abducted, shot or raped. But I was smart and maybe a little bit lucky. I would never recommend anyone do anything like I did that night. But I would recommend an organised trip ( preferably with a responsible tourism company that works WITH the community) to the favelas. They are beautiful in their own way and full of life.

Oh and if you were wondering, Daniel and I dated for the three weeks I was in Brazil. Possibly one of my favourite holiday romances. Of course, my current romance is WAY better obviously.

If you’re thinking of heading to Rio I probably wouldn’t recommend repeating my adventures. However, there are plenty of things to do in Rio. Have a quick look at Mike from Bemused Backpacker’s guide to 5 free activities in Rio.