I’m going to be honest, when I first heard about Aruba months ago I didn’t have a clue where it was. I had to Google it. In fact, I wasn’t just oblivious to its location, I also knew next to nothing about the island. No fun or interesting Aruba facts or figures had ever come up in any table quiz I’d ever gone to.

However, I was lucky enough to spend a week in Aruba on a press trip that focused on the theme “like a local”. I spent time with some incredible Aruban people and got the inside scoop on what really makes Aruba and Arubans tick. Here’s 50 amazing facts about Aruba, as told to me by locals. Hopefully it’s all the Aruba information you’ll ever need!

If you enjoy this post I’d love if you’d join my Patreon community where I share my most personal travel tales, fails and experiences.Become a Patron!

2) The origin of Papiamento is still a bit of a mystery. However, Arubans say that it was developed from Portugeuse-African pidgin which was used as the language for communication between slaves and slave traders. There are also some Dutch and Spanish influences.

3) In most schools in Aruba children have all their lessons in Dutch. They can only speak Papiamento during the Papiamento class.

4) Aruba is a former Dutch colony. It is now its own country. However, Aruba is still part of the Kingdom of the Netherlands.

5) Aruba is not in Hurricane Alley, which means there’s no BAD time to visit Aruba.

6) Aruba’s currency is the Aruban florin which is worth about 0.56 US Dollars. It is so rare that you might need to find a specialised currency provider like World First to be able to buy it.

7) The crime rate in Aruba is pretty low. It is one of the safest islands in the Caribbean. Obviously still use your common sense, don’t do anything ridiculous like hang around in dark alleys alone at night. But in general there is not much to worry about.

8) Carnival in Aruba is a BIG DEAL. It’s not just Brazil! There’s parades, Carnival Queen elections, dance competitions and more. So if you’re in Aruba in February, make sure to attend one of the many Carnival events.

9) They LOVE Beach Tennis. Never heard of it? Neither had I. It’s sort of like a mix of tennis and volleyball played on the beach. Give it a go.

**There are LOTS of things to do in Aruba, including quadding, diving, island tours and more. You can check out the tours and activities HERE.

11) What is Aruba famous for? Well, the only big export they have are the Aloe Vera products made at “Aruba Aloe”. They create beauty products and medical gel to help treat burn victims.  You can tour an aloe vera factory during one of the complete island tours.

12) Aruba’s slogan is “One Happy Island” and it completely lives up to it. The people all LOVE their island and could talk about it all day long. There is a lot of island pride and for good reason!

13) Aruba is a windsurfers paradise. It holds the world amateur wind-surfing championship each year.

14) Aruba is home to a rare species of the burrowing owl. It lives in burrows in the ground hidden by cacti. It is one of Aruba’s national symbols and appears on postage stamps.

15) Most years Aruba has over a million tourists visit its shores. That’s around 10 times the local population.

16) Aruba is one of my favourite Caribbean islands. OK, not such a useful fact but I like to keep my posts a bit personal.

17) Arubans love a good cleanse! A tablespoon of castor oil or Aloe juice after gorging at Christmas, or before returning to school is normal.

18) Aruba is home to the most endangered type of rattle snake in the world, the Aruban rattlesnake. There are only around 230 left in the wild.

20) What does Aruba look like? Surprisingly Aruba is NOT a lush tropical Caribbean paradise. It is dry and arid. This surprises a lot of tourists as they are expecting a “tropical island paradise”. It’s more like desert and cacti. But still beautiful! 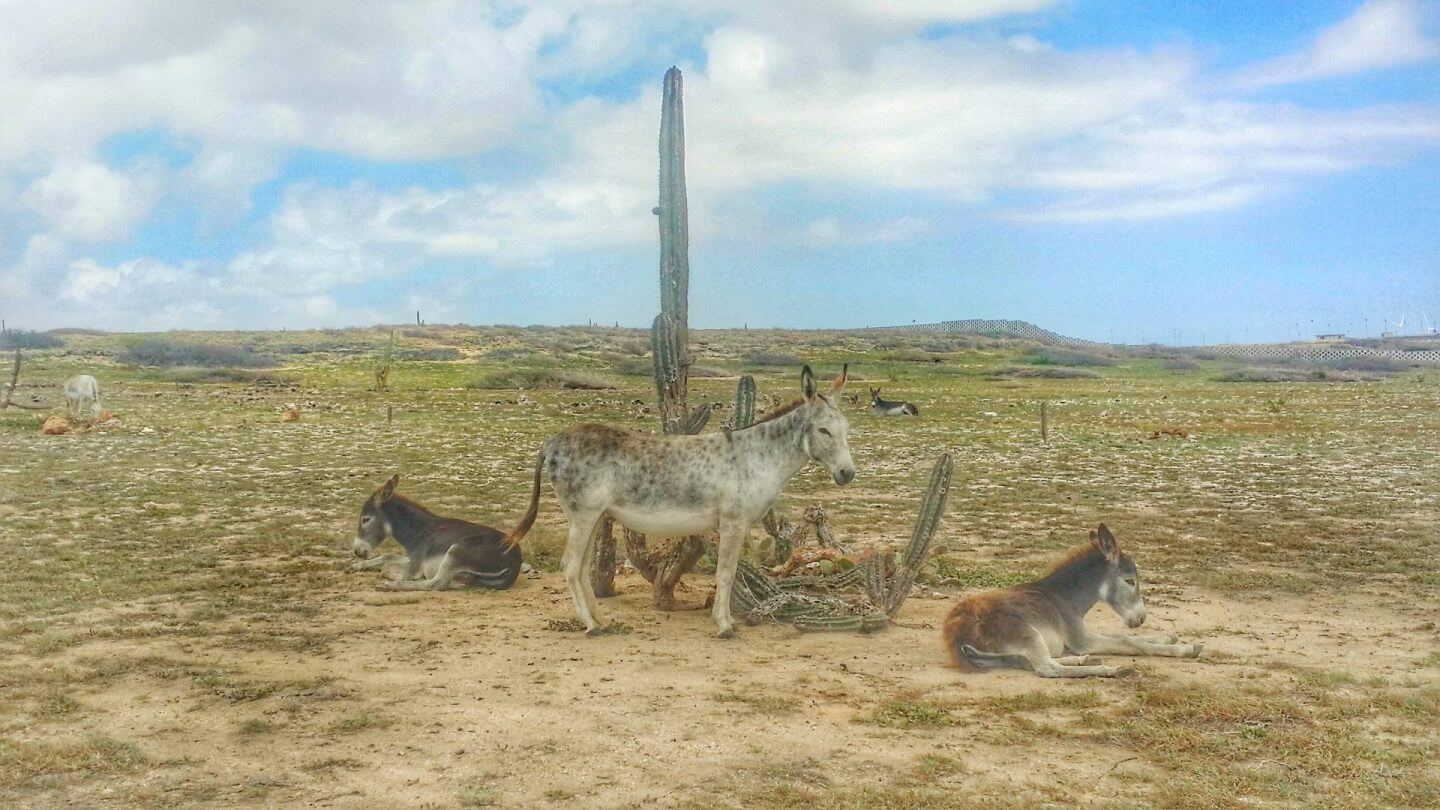 The arid landscape of Aruba with some of the wild donkeys.

21) The Aruba Ariba cocktail is the national cocktail of Aruba and it is DELICIOUS. Make sure you give it a try. It contains vodka, rum, coecoei, creme de banana, orange juice, cranberry juice and pineapple juice.

22) Balashi is the local beer of Aruba. It is produced on the island and is best enjoyed cold and by the beach!

23) The Aruban people love to tell stories. When I was at a BBQ with a wonderful family, Charles, the designated chef, told me all about Mingo the flamingo that died of alcohol poisoning because he shared one too many cocktails with the tourists. When I was shopping in the markets Nino told me all about the symbolism of the black butterfly in Aruba.

25) There is a private island belonging to Renaissance Hotel where you can feed Flamingos on the beach If you’re staying there. It’s an adult only beach and absolutely BEAUTIFUL.

26) IT IS WINDY – 25 knots is a normal day. It makes the heat more manageable and hey, it’s a natural exfoliant!

27) Pretty much all of the supermarkets in Aruba are Chinese owned apart from one called “Superfoods”. Which is a bit odd to see. Honestly, I’m not sure how to feel about it.

28) There is a big Guinness mural on the wall of a bar in St.Nicholas, because everyone loves the Irish.

29) On St. John’s Day in Aruba there is a harvest festival called the “burying of the rooster”. They bury a rooster in the ground, leaving his head about ground. Then they dance, dressed in yellow and red. During the dance a blindfold is put on and people take turns trying to decapitate the rooster. This practise has been updated and is now more humane. They use a fake rooster or a flag.

30) Iguana meat is a local delicacy. Yep, apparently it tastes like chicken. If you’re a foodie, give it a go.

Chilling with the flamingos at Renaissance private island.

31) There are over 90 different nationalities living on the island in pretty much perfect harmony. Maybe we could learn something from Aruba?

32) People stack rocks on the north shore of the island in a place called the wishing garden, but they shouldn’t because it is damaging to the environment and disrupts the flow of water in the area. Local responsible tourism reps are trying to stop it.

34) Nearly all men over 40 in Aruba are part of a local softball league. It is kind of a tradition according to my Aruban born and raised tourism representative.

35) 65% of the plants on the island can be used for herbal medicine!

** If you’re visiting Aruba and need a guide book I recommend the Fodor’s Aruba Guide Book. You can pick up a copy HERE for ~$10.50**

36) The famous Divi Divi tree from all the Aruban postcards is actually called Watapana tree. They all point southwest due to trade winds that blow across the island, sort of like a natural compass.

37) Locals make kites from cactus wood which is a light yet sturdy wood found inside the cactus after you remove the flesh. PERFECT for soaring though the sunny skies of Aruba.

38) Most young Arubans spend a year in the Netherlands studying, or even move there permanently, as Aruban people have Dutch passports.

39) Aruba, together with Bonaire and Curacao, form a group of islands called the ABC islands. Cute name!

40) Locals own private beachs with small stone beach houses that can be rented by tourists for around $30 a weekend. There is no running water or electricity but they are usually very picturesque and quiet. You can no longer buy these beaches, but those that already owned them were allowed to keep them.

The beautiful ladies of the weekly Bonbini festival!

41) Aruba is home to wild donkeys! Locals tole me tales of trying to catch them in their youth and tame them. There is also a donkey sanctuary for injured and mistreated donkeys.

42) Lion fish is an invasive species in Aruba and the government have encouraged locals to spearfish them. They make a MEAN ceviche apparently.

43) Aruba also has another invasive species, the boa constrictor. This is a massive problem as they are eating a local species of burrowing owl that is only found on Aruba.

44) Aruba is only 18 miles away from Venezuela!

45) Arikok national park covers nearly 20% of the island. It is worth exploring for a day! There’s plenty to see.

46) Aruba had its very own goldrush in the 19th century! You can see the remnants of the buildings at the Bushiribana Gold Mills.

49) Ever walk barefoot on the beach and burn your feet? Well, this won’t be a problem in Aruba as the unique combination of coral and shell in Aruba’s sands keep them cool (ish) all day long.

50) Arubans love fried food! And who can blame them?! Pastechis (kind of like Cornish pastys) are a traditional Aruban breakfast food. I love the cheese ones. Funchi is another AMAZING food served as a side/appetiser in Aruba. It’s like fried corn bread with cheese on top.

SO, get booking your trip to Aruba! After all, the best time to visit Aruba is now! Here’s my latest Youtube video from Aruba that might give you a bit of an insight into what life is like on the island! It’s not all Aruba facts and figures but it’s a lot of fun. Subscribe to my channel if you enjoy it 🙂

Have you been to Aruba??
Is there anything I missed?

*I was invited to Aruba by the Aruba Tourism Authority UK, however, all thoughts and opinions expressed in this article are my own as always.

What to Wear in Aruba – Outfit Checklist

5 Fun Things to do in Aruba

All Inclusive in Varadero Cuba